By Sarah Quale — Up to this point, Planned Parenthood has boldly denied its eugenic roots and the racist legacy of its founder, Margaret Sanger. But the current move to “call for a reckoning” of that legacy is yet another strategy to continue it.

Anyone in the pro-life movement can tell you that the evidence proving Margaret Sanger’s racist and eugenic motivations is overwhelming. It’s been in plain sight since the inception of her work in the early 1900s. Planned Parenthood has repeatedly and vehemently denied the motivations of its founder and the evil roots she planted over a century ago… Until now.

In an email to supporters, McGill Johnson gives three examples of “the harm Sanger caused to generations of people.” 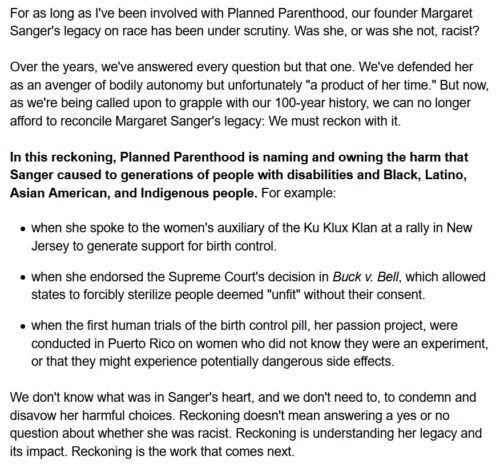 Obviously, there are many more examples throughout the founding and growth of Planned Parenthood, in Sanger’s own writings, speeches, and public associations. But what about after Sanger’s death? What about Planned Parenthood’s continuous targeting of poor and minority populations through birth control and abortion?

According to McGill Johnson’s email, reckoning with Sanger’s legacy is “the work that comes next.” But what will that look like?

Last July, Planned Parenthood of New York removed Sanger’s name from its building, calling the move “both a necessary and overdue step to reckon with our legacy and acknowledge Planned Parenthood’s contributions to historical reproductive harm within communities of color.” Then, they ousted their leader, Laura McQuade, for perpetuating a culture of “racism and anti-blackness.” In her email, McGill Johnson praised these events as examples of the work that has begun and said Planned Parenthood “has a chance to heal those harms and build a better future in our second century.”

Reveal the truth. Grapple with it publicly. Promise to be better. Set your organization square in the center of the “anti-racist” movement being force-fed to America by critical race theorists.

Then, in broad daylight, continue to target minority populations through birth control and abortion in the name of “reproductive justice.”

Sarah Quale is president of Personhood Alliance Education, founder of Educe® online learning, and author of the Foundations online pro-life curriculum. She is an award-winning curriculum and instructional designer who has worked for over 20 years in corporate, academic, and ministerial environments. 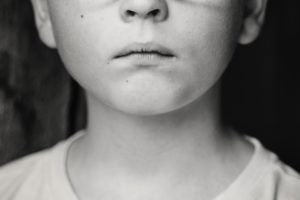