So, if I’ve said it once I’ve said it a hundred times, but let’s do it one more time ? and with pictures to illustrate.

The liberal left or progressives or whatever we are suppose to call them these days (or at least their leaders) hate us, period. They hate what we believe in and what we stand for. They don’t really want to be friends nor “live and let live.” They want to shut us down, bend us to their way of thinking, or utterly destroy us. This insanity from conservative leaders or the Republican Party to either bargain with them or to go totally silent on the issues that are the cornerstone of what their base believes for whatever reason is just that, insane!

Case in point, as my friend Steve Deace points out regularly, the pro-abortion lobby will spend their resources trying to remove even the most liberal, “pro-choice” Republican. They will lie (because, really, what’s lying compared to their daily gig), exaggerate, and twist the truth to ensure that the blood money continues to flow. So WHY, when we have the “trifecta,” at the national level, here in Iowa, not to mention a vast majority of the states across the country, can’t we at the VERY least, stop sending them our money?! That is literally giving ammo to those that want to figuratively (?) take you out! You would think even the most feckless politicians’ survival instincts would kick in here.

I didn’t mean for this to turn in to such a verbose rant, but I got a mailer yesterday that really irritated me on several levels, one that I want to address here. Let’s get to that mailer…and the pictures I promised. 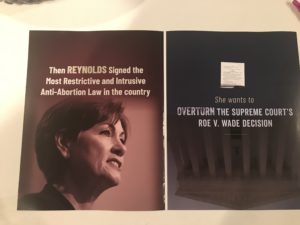 First, let me say one thing, I am NOT saying that Gov. Kim Reynolds is a liberal or pro-choice. In fact, I recognize that the governor signed into law arguably (not going to debate this here right now) the most pro-life legislation in not only Iowa history, but probably the country, at least in the last 45 years. We have not always seen eye-to-eye; I have implored her to publicly lead and speak out on issues that are important to her base, in particularly the issue of life. Her opponent has been doing just that since he announced he was running for governor, so I have been continuing my call to PLEASE lead! 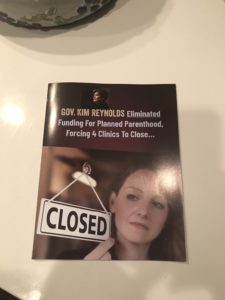 Finally, a week or so ago, the governor’s campaign put out a “TV” commercial…I use quotes because I have yet to see it on TV,  just online. All of this finally brings me to the mailer (btw, it’s at least the second different one we’ve received in our home from the pro-abortion candidate this week)…this mailer says that Gov. Kim Reynolds “eliminates funding for Planned Parenthood, forcing 4 clinics to close.” THAT is a blatant lie!

Gov. Terry Branstad signed the legislation that (partially) defunded the abortion industry. Btw, the legislation just said that healthcare providers couldn’t receive state medical funds if they provided abortions. Anyway…we also knew that at least 2 of the clinics were closing long before the bill was ever introduced.

Here’s the rest of the truth…Planned Parenthood is becoming more efficient. They are building video/call centers and larger “clinics” designed to meet the “prolife” restrictions passed across the country. They are coming to our daughters’ phone and bedrooms! Now, let me say this…much Sen. Joni Ernst’s opponent a few years ago, this is some of the best advertising for Gov. Reynolds to her base! I just wish it was her saying it…